What is a SMART City? When can you say that your city or community is SMART? In most developed countries, the direction is towards the development of SMART Cities. How about in developing countries? Is there such a thing as a SMART City?

The City of Santa Rosa in the Philippines has been positioning itself as a SMART City as early as 2014 through the leadership of Mayor Arlene Arcillas. Why is it important to be branded as a Smart City? Does it really make a difference?

The City of Santa Rosa is one of the industrialized cities outside Metro Manila. It is known as the “Automotive Capital of the Philippines” since almost all multinational major car manufacturing companies decided to establish in the city. It is also known as the “Next Wave City in Information, Communication, and Technology” having identified as an IT-BPO hub in the region by the national government. The City is also a tourist destination, Enchanted Kingdom (it is like Disneyland of the Philippines) is also in Santa Rosa. Does having all of these features in a city makes it Smart? Or there is more?

I was very fortunate to represent our Mayor as one of the panelists in the 2019 Regional Science and Technology Week (RSTW) and Regional Invention Contest and Exhibits (RICE) on September 26, 2019. The theme of the activity was “Science for the People: Enabling Technologies for Sustainable Development”. The session was Technology Talks about SMART Governance in SMART Cities. Even though I was one of the panelists, I surely learned a lot about what a SMART city is which I will share below.

The session was moderated by the CALABARZON Regional Director Dr. Alexander Madrigal. The first speaker was Pres. Colin Cristie. He is the President of the Analytics Association of the Philippines (APP). His topic is about Framework for SMART Cities. He discussed about multiplied innovation wherein one innovation leads to another, the importance of data and correctly using these data, and building an analytics ecosystem in the country.

Click to know more about Analytics Association of the Philippines: https://aap.ph/

I am not an Information and Technology (IT) person, but as a Planner, I also believe in the importance of data as inputs to planning and implementing programs and projects. I thought about a program wherein local government units (provinces, cities and municipalities) collect data from census/survey. This is the Community Based Management System (CBMS). CBMS is a household survey that identifies the following indicators: health, nutrition, housing, water sanitation and access to safe water supply, education, employment and peace and order.

The conduct of the CBMS is costly and tedious. However, the importance of having these data is significant that the national government even enacted Republic Act 11315 also known as the CBMS Act to institutionalize data gathering to all LGUs in the country. The CBMS Act was approved on February 2019.

This mean SMART Cities use data in their decision making.

The second speaker was Mr. Alejandro P. Melchor III. He is the Chair of Smart Cities Committee of APP. His topic is about the Challenges and Opportunities in Developing Smart Cities. He talked about the emerging potential of the Philippines as the best country in terms of putting investments. He discussed how developed countries centered its national programs in developing SMART cities. He highlighted that when a city brand itself as a SMART city, development follows such as inprovement in its real estate market. Global institutions also pour out its support and resource to SMART Cities. He also presented the ASEAN SMART Cities Network wherein many cities in other countries are included in the network and only 3 cities (Manila, Cebu, and Davao) in the Philippines are included.

My take on Mr. Melchor’s presentation is that pursuing to be called/recognized as SMART City is a sound strategy in developing an LGU. Opportunities follow a SMART City. People benefits in such a city. Our Mayor is right all along to pursue a SMART City strategy. The country should at least consider this strategy. It also makes sense to start with cities because it is projected that by 2050 most of the people (68%) will be living in cities/urban areas. Let’s start with cities but let us not forget the municipalities/towns and other LGUs.

The third speaker was Dr. Antonio M. Del Carmen. He is a Board Member of the National ICT Confederation of the Philippines (NICP) and president of Laguna Industry Network for Knowledge, Innovation and Technology (LINK IT). His topic is NICP’s Role in Developing Smart Cities. Dr. Del Carmen talked about the importance of developing a strong talent pool that can match the needs of the IT industry, specifically the IT-BPO industry. He introduced the importance of collaboration among Academe, Government and Industry. He also emphasized the willingness of NICP to help other cities and municipalities transform into a SMART city/municipalities.

My take from Dr. Del Carmen’s presentation is that SMART Cities are composed of skilled workforce. Developing your people will make you a SMART City. I also learned that the local government should not take all the burden in its objective of becoming Smart. Local Government should partner with the academe and industry to achieve this objective.

The fourth speaker was Mr. Tristan M. Ocampo. He is the Technical and Design Promotion Manager of ABB Inc. His topic is Intelligent Technologies for SMART Cities: Building Blocks for Sustainability. Mr Ocampo talked about Intelligent Technologies, self-sustaining/sustainable cities, general characteristics and components of a SMART City, among others. He introduced their product ABB Ability. It helps by supporting an entire project ecosystem. He concluded his presentation by citing examples of cities and projects wherein ABB services improved/made the project SMART.

What I like about Mr. Ocampo’s talk is that he emphasized that programs and projects of a SMART City is defined by the needs and expectation of its constituents. It means that becoming a SMART City is contextual. Any city/town can vie to become a SMART City/Town. He also talked about sustainable city. For me, a sustainable city is economic, social, and environmental development.

The fifth speaker was Mr. Joona Selin. He is the Executive Director NordCham Philippines. Mr. Selin discussed the possible and important role of NordCham by providing support to LGUs in its journey to become a SMART City. Cities in the Philippines can learn from other cities in their member countries on their experience of becoming a SMART city.

SMART City is relatively new in the country. The City of Santa Rosa and other cities will benefit from the lessons and experiences of other cities. However, Philippine cities should only adopt / copy principles suited to its local situation/context.

I was the sixth speaker. I talked about the role of the city in improving the quality of life of its constituents by providing efficient and effective programs. I presented Santa Rosa as the number 1 in local revenue collection in CALABARZON and how these collections fund the delivery of services. I mentioned also the presence of a rich talent pool and big universities that started to locate in the city. I also discussed Santa Rosa as a one of the 100 Super Cities in the world as identified by Tholons International in terms of digital services and outsourcing.

The seventh and last speaker was EnP. Angelica Francisco of the Development Academy (DAP) of the Philippines. Enp. Francisco talked about ISO 37106:2018 which provides guidance on establishing SMART city operating models for sustainable communities. She also discussed how is studying a SMART city template applicable to Philippine context.

To summarize the points I learned from all the speakers, I will try to define what is a SMART City and why is it important.

A SMART City is the use of data in understanding the needs and expectations of constituents and subsequently providing programs that will improve the their quality of life. A SMART city is self-sustaining and promotes sustainable development. It is the use of technology in providing effective and efficient services. It is people development. It varies based on local context. To become a SMART City, the City must be certified in ISO 37106:2018 or the country’s SMART City agency. The positive benefits of pursuing to be a SMART city outweighs the challenges/issues that it may incur. 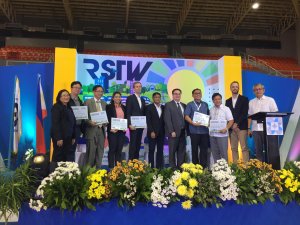 A city planning and development coordinator (City Department Head) in a medium-size fast urbanizing city in the Philippines. A certified US Planner, a Philippine licensed Environmental Planner, and a Project Management Professional (PMP). View all posts by cityplanningcoordinator

This is a text widget. The Text Widget allows you to add text or HTML to your sidebar. You can use a text widget to display text, links, images, HTML, or a combination of these. Edit them in the Widget section of the Customizer.
Follow City, Urban, Regional, & Environmental Planning on WordPress.com
%d bloggers like this: